Recently I saw a video depicting the weight we so often carry around with us. A little girl appears on the scene and scoops up a big rock, lifts it over her head and let’s it fall into her backpack. She is happy, she does this a couple of more times still smiling.

In the distance young children are jumping into a lake, laughing, carefree…

As time goes on she is no longer happy about adding rocks – big or small – to her backpack. She hears the laughter out by the lake.

Others come along contributing their bricks and stones to her backpack. Barely able to walk she makes her way to the dock watching the other children. A little girl motions her to join them. She shrugs her shoulders asking how? Her new friend helps her take her backpack off dropping it behind her, they run to the dock’s edge…

The Lord upholds all those who fall and lifts up all who are bowed down. (Psalm 145:14 NIV)

Do you have a backpack full? I did and I didn’t even know it. After all these years I finally realized that is my way, I pick up everybody’s brokenness because I want to make it better.

But we can’t carry our own broken pieces let alone other’s. So I took a day, I gathered rocks and markers. I thought through what felt heavy and wrote on rock after rock. Then I set out to water’s edge to where I first felt cool water and sand slipping out from underneath.

Humble yourselves before the Lord, and He will lift you up. (James 4:10 NIV)

I pulled out a rock lifted it to Jesus and said ‘You are stronger, more capable, and are healer’ and hurled it as far as I could. ‘You are forgiver, more understanding, and accepting’ and away went another. Giving each to Him who carried all our burdens to the cross so that we would never have to be weighed down again.

Oh, if we could grasp our freedom in Him. In our backpack He only puts what He made us for: smiles to lighten another’s load, kind words to touch a hurting heart, joy in spite of circumstances, love big enough to shine His light, peace that only finds its way to us through Him, gentleness when the world is harsh, His Holy Spirit filling us up and lifting us far above all we perceive to be ours to solve…

An anxious heart weighs a man down, but a kind word cheers him up. (Proverbs 12:25 NIV) 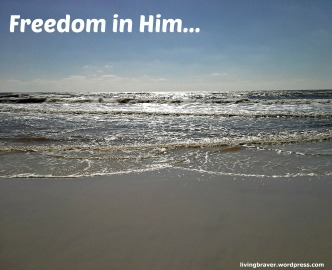